Gerudo Valley, that breathtaking valley of the desert, where pirates, ancient spirits, sand, and much more awaits, is home to one of the most evil video game foes of all time, the legendary Ganondorf --- also known as Ganon, Gannon, Demise, Calamity Ganon, and a few other nasty names, in Hylian language. He is the pure incarnation of all that wickedness, greed, a desire for power, and ultimate corruption can embody...and he means business. He was trained by some of the ruthless Gerudo pirates, in the worst desert ‘hell on earth’ a man or woman could ever imagine. And legend has it he was the only male of his kind, a male Gerudo being born once in a blue moon, so to speak….this is in certain Zelda storylines, but not all of them.

Anyways, Gerudo Valley is entirely unique, featured by its name and splendour once in “The Legend of Zelda : Ocarina of Time”. But it has, since, never been forgotten as a place of old. I still recall the amazing background music that plays whenever you are in the Gerudo Valley (of which you can Google “Gerudo Valley soundtrack N64” or something of a similar search phrase, and listen to it for free on YouTube, OC Remix, or other sites). In the Gerudo Valley, it’s basically always summertime, and it’s hot, yet refreshing, as you can see a river and stream at the bottom of its main entrance (which ends up flowing directly into Lake Hylia, and if you dive down….you will ride the current and get there easily….a nice little ‘cheat’ that’s no big secret). 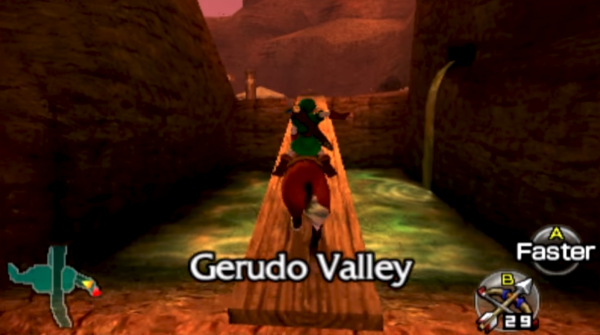 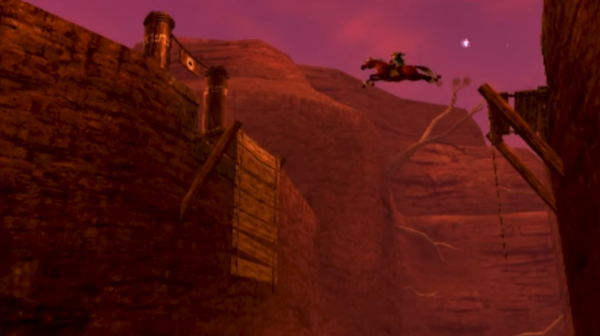 Interestingly enough, though, the Gerudo Valley does also make a couple of other side appearances, or ‘guest appearances’, in other Nintendo games….non - Zelda titles, maybe. You may own one or two already. I’m talking about Super Smash Bros. and Super Smash Bros. Ultimate, each made for Nintendo’s 3DS and Wii-U. You can connect and play, engaging both consoles and many players. It’s awesome.

The Gerudo Valley, in these two games, serves as one of the stages or ‘backdrops’ you can play in. Play as any character you want. Have some fun.

In “The Legend of Zelda : Twilight Princess”, the infamous Lanayru Desert, though it does not look exactly like the original Gerudo Valley does, still bears a sort of resemblance and is still awesome nonetheless. It is a far more massive, open - world, spacious desert than the Gerudo Desert (just past the Gerudo Valley) is….lots of more room to roam in, but lots more enemies and other dangers, too. So keep that in mind. And of course, though a little bigger or a little smaller, there are other places similar, across countless other Zelda games, but none of them are called Gerudo Valley...or look just like the Ocarina of Time place.

In both of the Super Smash Bros. titles we mentioned, Gerudo Valley is set as a flat surface, which interestingly, has been divided up into a sort of chasm, respectively. And you see a bridge, right in the middle, from which you can cross from one side to the other. BUT BE CAREFUL ---- this bridge can be destroyed, if it gets attacked enough. And underneath it, there is impending doom….if you’re on the bridge and fall, you have to move fast...or even if you see or hear the bridge cracking, or breaking, in the first place.

Get to safety. Take out the other players, or storyline enemies. That’s the goal here.

Koume and Kotake, the two witches practically born and bred in the Gerudo Valley, show up in this stage, too. They appear as “stage hazards”. Watch out for both their fire and ice onslaughts...they will attack anyone who gets in their way.

In Ocarina of Time, however, you really can’t access Gerudo Valley’s “closed off part” (just past the main broken bridge, by the entrance) until you become an adult….unless you use a ‘cheat’ in the game. SPOILER ALERT. IF YOU DON’T WANT TO KNOW WHAT IT IS, DON’T READ THE REST OF THIS PARAGRAPH…..so basically, get yourself a cuckoo, standing on a certain post at the entrance of the valley, and fly yourself across. Some have attested this actually works --- I have not tried it myself --- and some have claimed it does not, or only with extreme timing and luck. See pictures of the post you need to stand on, and more, by just Googling this ‘cheat’ online…..

But when you do enter that part of Gerudo Valley that’s past the broken bridge, the usual way, you do so by horse...with Miss Epona, your wonderful ride. This horse has to be going fast enough, and make the jump at the end of the road. It makes for a nice, short little cut scene in which you see Link, on horse, fly to the other side, practically….it’s pretty cool. 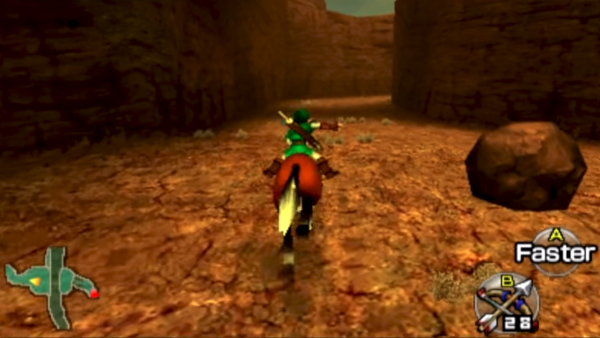 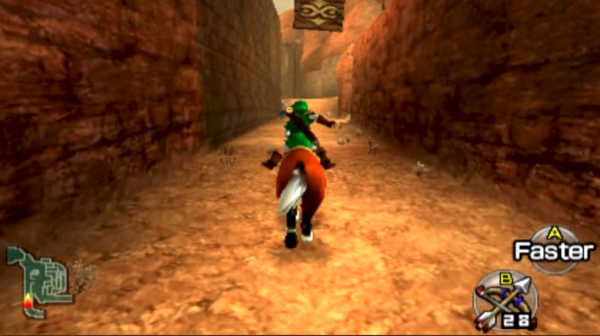 Though not the same Gerudo Valley, once again, you do still see another Gerudo Desert, still, if you get the game “The Legend of Zelda : Hyrule Warriors”. In Hyrule Warriors, the desert is found SouthWest, just as it is in Ocarina of Time. Two bridges spanning a river can be seen there. It looks a bit similar to the original valley, and its desert, but of course, since time has passed, changes have been made….and this Gerudo Desert is now its own thing.

So this has been a bit of information on the Gerudo Valley, from Zelda lore, folks : We hope you have loved what you have learned. And if you knew all of it already, then we give you our best ‘kudos’, for you are a true Zelda aficionado. We love Zelda fans who know their Zelda, backwards, or like the palm of their very own hand, moist and sticky from all that good gaming…..

Anyways, long live the Gerudos (even though they’re the bad guys, usually….but without them, there’s no story or plot). And long live their valley! Zelda rules…..