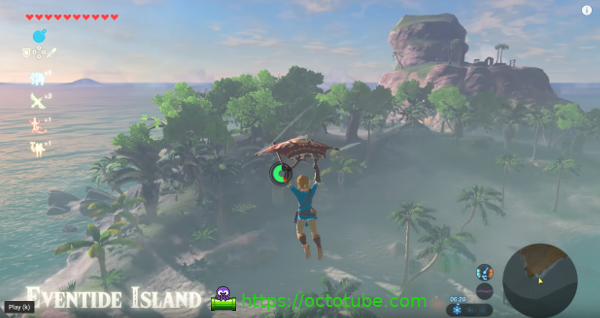 Eventide Island is one of the islands you’ll explore, should you choose to play the new Wii U / Switch game, The Legend of Zelda: Breath of the Wild. And the title phrase, “Stranded on Eventide” simply refers to one of 42 different quests you’ll have to play your way through in order to successfully beat all of the game. Stranded on Eventide is a shrine quest in which, after you complete, you’ll then be able to get access to the Faron region’s Korgu Chideh Shrine, which has apparently been hidden from the public eye for some time now...but hopefully, with your best game on, you can uncover it and more.

You start off the shrine quest by reaching Eventide Island. And after you set foot upon it, the real adventure begins. But how do you get to this stranded island, in the first place? Good question…..


To get there, first of all, you need to use the game’s para - glider and step off from Cape Cales’s Muwo Jeem Shrine, in a carefully calculated leap of faith that you will, in fact, land safely there. But before jumping off, you also need to ensure that you’ve got the needed upgraded stamina wheel that already holds at least 1 -2 stamina elixir sections on it. And if you want to make things a little more fun, you can even make a quick stop before arriving on the island….gliding yourself slightly to the left, where you should see a very small group of rocks forming a mini - island of their own. Carefully land there in order to come upon an unopened treasure chest hiding a whopping 50 rupees inside of it….easy money, right?


And it’s free. That’s the best part. When you’re ready, jump back on the para - glider and right onto the island....


Then, advance while on Eventide Island, at your own discretion. And be afraid, very afraid. Challenges await.


You’ll instantly halt at the sound of a voice, as you get closer inland by the beach. Your Runes will be the only things that will not be stripped of you, moving forward. Now, you must truly survive, without all your goods, stranded on Eventide Island…..


You now have no armor, inventory, weapons, or even food or drink. You must use your mind and your heart to get through. Can you do it? I believe in you. Furthermore, at this point in the game, you’ll notice that your “save progress” function has been disabled, meaning that if you should die for any reason, you’ll need to start all over again from the point in which you landed on the island. (It kind of makes you wish you could reverse time just a few seconds before that last save point, and para - glide your way back to where you where in the last shrine, right?)


But now, it’s move forward or die. It’s that simple. You have no other choice, and the mission becomes to collect 3 special orbs, and place them carefully on three platforms they are designed to be placed on. These are not any kinds of orbs we’re talking about but ancient orbs that must be sought out and then fought for….to the death. There’s no plan B. Oh, boy, what have you gotten yourself into now?

Breath of the Wild Island Challenge

On Eventide Island’s infamous Toronto Beach, there’ll be a skull that can help you get started on where you need to be next. It’ll point you to some minions sitting around a warm campfire, bokoblins (nasty modern goblins with bad breath and an even fouler temper, to put it simply), to be exact. There so happens to be a group of exploding barrels right next to them --- get where this is going?


Now it’s up to you to ignite the explosion and protect yourself from them and from the blast. Use a remote bomb, through carefully timed and guided stealth, and set it off when it’s close enough to the barrels….then the rest, the bomb takes care of. Be careful, though; if these monsters are alerted of the bomb and of your presence, then all will be lost...including your very life and any hope of escape.


After you’ve managed to successfully blow up the barrels, you’ll then be able to pick up a bit of food and even “starter weapons” that are sitting nearby. It’s better than nothing, right? We’re off to a good start…..


Then, as you advance, you’ll notice a platform, which a hard slab has blocked off. It poses your next challenge. All you need to do is use your Stasis right on it, as you use your heaviest weapons to further bash it, and it’ll fly away on its own. Now, it’s no longer an obstacle and you can safely get and place your first orb on the spot indicated. 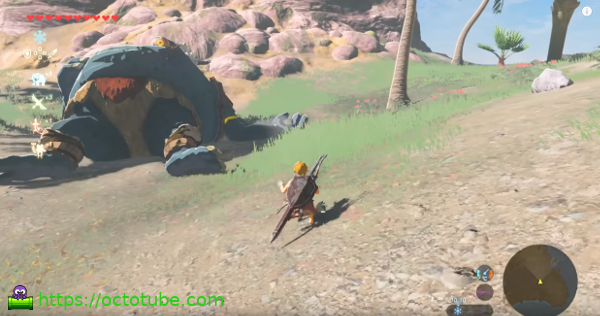 You then need to reach another platform, next, which is guarded by a Hinox. At first, you’ll have to sneak past in undetected and should refrain from engaging in combat, alerting others to your presence. Once you are able to sneak by, you can get up to higher - level ground. Defeat the enemies there, quickly, using your weapons. This you’ll do through your Magnesis, engaging your surrounding metallic crates as the weapons of choice….when these move, they’ll take your enemies down. (They’ll actually make contact with an electric ChuChu nearby, which, as we know from past Zelda games, will explode upon impact and thus eliminate your enemies in the vicinity.)


Get the orb and place it. For the final orb, it’s a little tricky though. But you can still make it happen…..


This orb is placed around the Hinox’s neck. Sneak right up to his hand. Then, the very moment you notice him scratch his nose (gross, right?), you’ll snatch that orb from beneath his nose. Then, of course, if it were a real - life scenario, I would tell you to wash your hands….and the orb.


Anyhow, that’s “Stranded on Eventide”, in a nutshell.

Koholit rock is a large rock on Eventide Island. It is basically the highest point on the island. Then name is meant to remind us of Koholint Island from Link's Awakening. It is spelled slightly differntly with the name of the rock missing the letter 'n'. It is the highest point on the island. If you are curious, you can learn more about Link's Awakening here. We also have a page all about Koholint Island here. This was a great great Zelda game and is totally worth checking out. 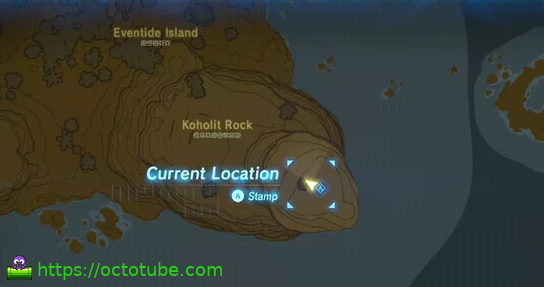