Now, you’ve at least had taste of the nasty Ghirahim prince and have seen a bit of his blade in action. But your quest is now to begin, and you will have to encounter much before you can fight him again and stop whatever cruel plan is boiling beneath the surface….which already sounds like something that needs to be stopped before it endangers many lives, which is the usual case. Zelda villains are never up to any good, are they? Evil is always at the heart of their thoughts and minds.

In the Earth Temple (the second time you run into such a temple by that name, as well, if you remember the first occurence being in The Legend of Zelda : The Wind Waker), found in Eldin Volcano, your true ‘next challenge’ will see what you’re made of. Here’s a side note, before getting further in detail about the dungeon, first : This second dungeon, as following the regular rhythm of most major Zelda games, is made of fire on the inside….it is inside a volcano, after all. And what’s interesting is that, in these Zelda games, you will usually start your first dungeon playing inside some lost, deep, abandoned woods. But the second dungeon after that will usually be in a place of heat or fire. And many others, then, are in water, sand and other scenarios --- see the pattern repeating itself in a new way here?

If you know Zelda, you know what I mean. And either way, it should be a true delight to see things following pattern again. When I played as a new player, I already saw it coming, having played Zelda before…..

Zelda, the legendary main Princess in all these game titles, usually, is said to have been taking a cleanse up in the springs by this temple. And Link goes up there to ensure she is all right (no, not to take a peek ; he is not really the naughty boy you might think he is). You’ll find a couple of Lizalfos as your mini - bosses, this time. 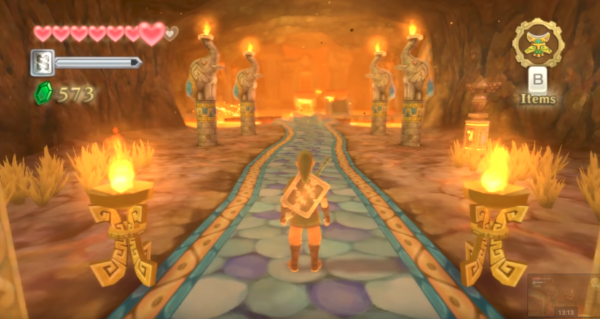 You’ll use your Digging Mitts to dig up some keys here as well. This temple’s full of different things you learn to do, as well as places you learn to go, an foes you learn to fend off. But speaking of these, a little more on your Lizalfos mini - bosses found here, which come in a pair of two…… 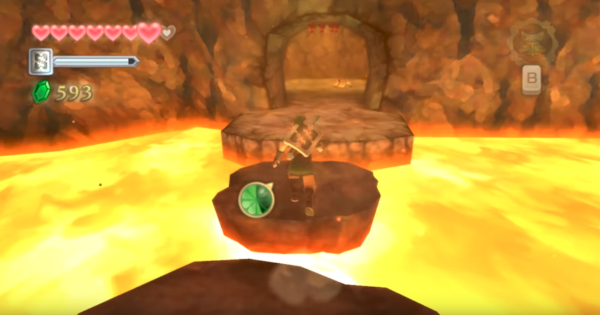 Aww, what a cute monster, that wants to kill you. These are big lizards that can jump, side step, flip, hurdle over, roll, and especially stab --- at you. They carry daggers with them and are ruthless. Thankfully, though, once your sword tends to pierce their ugly hides, it’ll hurt, and they’ll feel it. Keep poking, stabbing and slicing, and soon they’ll be too hurt to come back up, and now, your second mini - boss fight in The Legend of Zelda : Skyward Sword has just been completed. Jump up and down with joy. 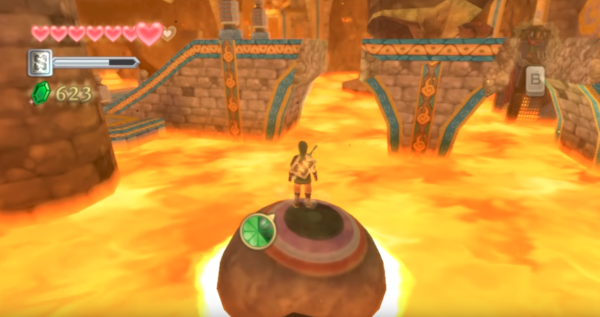 This temple, as you may already know by now, only deteriorates more and more as you get further inside of it, giving an appearance that it is going to fall apart completely --- hopefully not with you inside. It makes you scratch your head and ask, “How is this building structure even together, at this point? How have things not come crashing down already?” Good questions…..and these you might also have asked of your last temple dungeon, the Skywiew Temple, which also deteriorated by the minute.

But somehow, you did manage to come out without a scratch the last time (but perhaps not without a few wounds, stabs, cuts, bites, or burns). And you can make it through the rest of this temple, too. Believe it. Belief is everything, and that leap of faith is all you need. Continue on for a bit more, and you will come across some more rooms with challenges, as well as some foes of old ; but if you played Zelda dungeons before, you may have already met some of these guys, and they’re just old friends out looking to pick a fresh fight --- show them your hostile side, once more…… 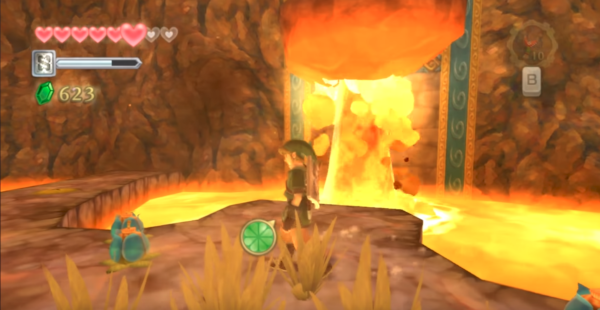 These baddies that I am talking about here include Bokoblins, for instance, which are a new way to name your goblins. They are as ecstatic as when you met them before, eager to arrive as early as they can to their own funerals, I suppose. And you will show them the way there. Just remember to parry, block, and strike. Keep on your toes, for you can be sure they will stay on theirs.

You will also run into some families of Fire Keese. Remember them? They’ve missed out and want to try and set you on fire --- but successfully, this time, or they will once again have failed their evil boss --- anew. Shoot them from feet away, strike them with a sword, hook them as soon as you get a hookshot, and basically, show them they can’t mess with you. However you end them is up to you, and that’s the fun part. 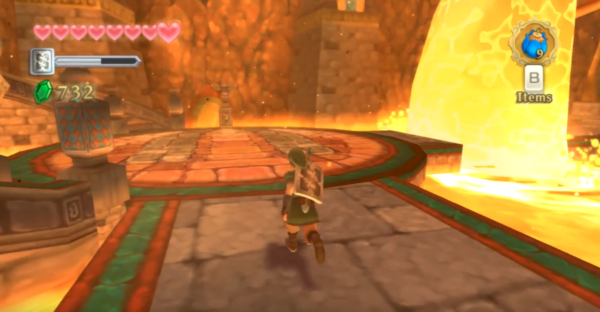 Red ChuChus come back, too. Have you seen them in the past? Well, they have reincarnated again and will try to make you miserable and slow, hurting your hearts by jumping up at you. Hit them first.

Other Lizalfos will be present, too. Show them their way to the grave. They will get the message. They are not to mess with you. Hopefully, they will learn and will not come back in future games --- but, actually, that is not the case…….

Anyways, at the end of the dungeon here, you will finally face Scaldera. This beast is ugly, has no manners, and frankly, no mother. It was raised on its own, so to speak, and holds no mercy for anyone who will oppose it. Move quickly, and this boss will have been crossed off of your “to - beat” list in no time. I believe you have the wit, stamina and courage already inside of you.

If you want to learn more you can check out these links: