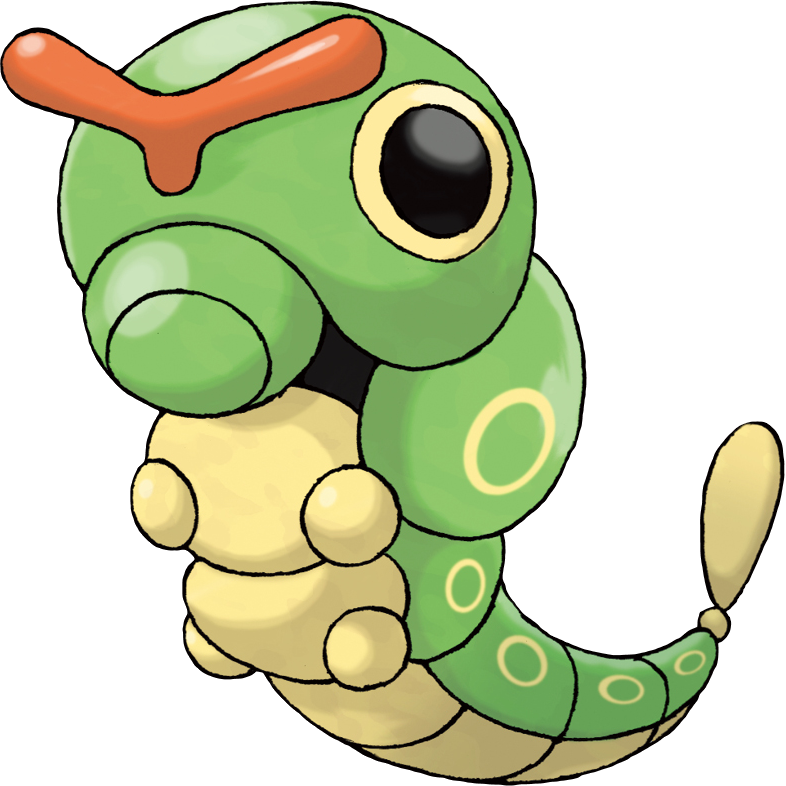 One of Pokemon’s favorite and most recognizable bug type, is none other than Caterpie! Caterpie is one of the cutest bug Pokemon that you'll ever see playing or watching Pokemon ( Who would have thought, a bug Pokemon could be cute). Although small for a Pokemon, Caterpies are one big bug! They check in at over one foot long and over six pounds. Caterpie is easily recognized by its fluorescent lime green color , five golden rings that line the side of its body and signature red antenna. Similar to with real life counterpart the Asian Swallowtail caterpillars, Caterpie’s red antenna is actually an organ called an Osmeterium which emits a foul smelling odor which it can protect itself just like Caterpie does. Well that does it for Caterpie’s origin story, let's get into the games!

In The Pokemon Games

Caterpie is one of the original 10 Pokemon in the Kanto Pokedex and made its appearance on first generation Game Boy games. It is the first bug type Pokemon that a player can run into in generation one games. Subsequently, Caterpie was the first Pokémon Ash caught in the animated series. In all three first generation games (Red, Blue and Yellow) players can run into Caterpie is in the Viridian Forest. Although Caterpie can be found in the forest in all three versions, the rarity, frequency and strengths of Caterpie varies. In red, Caterpie is a rare sight in the forest with only a five percent rate of encounters. Caterpies in Pokemon Red Version also tend to be weaker than their Blue and Yellow version counterparts, with all Caterpies in this version only being found on level three. However, Caterpies in Pokemon Blue version are much more plentiful with a 50% encounter rate. These Caterpies can also be found on levels ranging from 3-5. Blue version is also the only version in generation one where a player can run into a Caterpie outside of the Viridian Forest, as they can also be found on Route 2 in this version. In Pokemon Yellow version, players can find the most plentiful and strongest populations of Caterpies. These Caterpies have a 55% encounter rate and rage from level 3 all the way up to level 6.

Where to Find Caterpie?

Caterpie is a Bug Type

Being a Bug type Pokemon, Caterpie can hold its own versus grass, dark and psychic types. Caterpie does little to no damage to flying, steel, fire, poison, ghost, fighting and fairy types. On the defensive end, Caterpie can more than hold its own against grass, fighting and ground types. However, Caterpie will get quite a pounding from fire, flying and rock types. Caterpie does not have a very diversified move set. In the first four generations, the only two moves that a Caterpie has or can learn are tackle and string shot. In generations 5 thru 7, Caterpie can learn bug bite at level 15. Caterpie can be a defensive stalwart as it can have a maximum HP of 294 . It has a maximum attack of 174, and a maximum defense of 185. Capterpie's other stats range from average to below average. Overall, caterpie might be a novelty Pokemon but if evolution is your goal then a Caterpie might be the right bug for you!

Capterpie made its TV debut on the original Pokemon animated series. It was introduced in the episode entitled Pokemon Emergency. In that episode, Caterpie became the first Pokemon to ever be caught in the wild by the original Pokemon master Ash. This Caterpie was caught while Ash was walking through Viridian Forest. Not only does Caterpie have the honor of being the first Pokemon to be caught by Ash, it also holds the distinct honor of being the first become to evolve in the anime. However, Ash's Caterpie did not stay a Caterpie for long as it would evolve into Metapod by the end of the edisode and into a Butterfree by the end of the next episode. From there, Caterpie would make more cameos in the anime with a plethora of different trainers in many different story lines and situations. One of the more stand-out appearances Caterpie makes is in the episode "I Choose You!" Where it again evolved into Metapod in a battle with a Pencer and after the battle Metapod also evolved into a Butterfree.

So there we have it, Caterpie is cute, fast evolving, not to mention the original bug type Pokemon. What it lacks in physical stats and attack power it more than makes up for it with spunk and overall usefulness. If Caterpie caught the eye of the original Pokemon master then it is a must that any trainer trying to "catch em all" give it a try! Who knows, you might run into a shiny golden Caterpie out there.