I built a new world based on a seed that would start me in a Jungle near a village. I started out in the jungle surrounded by trees.

I knew there was a village not too far away. It was right on the edge of the jungle and and the desert. I decided I would avoid it for the time being since I didn't have the resources to fortify the village and I wouldn't be able to protect it from zombies once night fell. I decided that it would be best to just stay put for the time being and gather resources right there in the jungle. I was lucky and I found a hole in the ground with some exposed rock. It looked almost like stairs going down. I chose this as a place to create my first base.

The first thing I needed was wood and lots of it. I started hacking away at some of the surrounding jungle trees with my bare hands. After collecting enough I was able to build some really basic tools. From here I was able to start mining stone and coal which was already exposed in the hole. I build my first crafting table and started building stone tools, a furnace, and some torches. I build a set of doors as well. It was getting dark and I would need to start digging a tunnel so that I could block myself in with a wood door. I carved out a little room and light it up with torches. I would spend the first couple nights or so in here. I setup all my stuff inside. I was able to start growing cocoa beans on the sides of some jungle logs in my little cave.

I built a vertical, single block, cobblestone tower right outside my little cave dwelling. I light the tower up with torches so I would be able to find my way back if I ever got lost in the jungle. 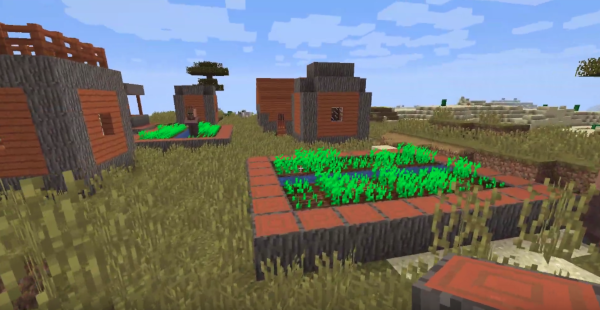 From here I dug a tunnel harvesting resources as I went. Eventually, after gathering enough resources, I decided it would be a good idea to have a bed. I would need wool to construct one so I would need to go out and hunt some sheep. I left most of my supplies in my chest inside my first base. I took off with just a sword, some torches, and some basic tools. I made my way out of the jungle, across an expanse of desert, and into the savannah. I came upon some hills and an open field. I found the sheep I needed to collect enough wool for two beds. After coming around the side of the hills I found a village. I wasn't expecting this one and it wasn't the same village that I know is supposed to be close to where I started ( I'll find that one later ). This Since I had a bed, I wouldn't need to worry about it getting dark, so I knew the villagers would be OK. I decided to setup a second base of operations right here and gather the resources I would need to fortify this village. I got right to work on that and started building a wall around the new village. I wanted to do things the right way so I decided to use stone bricks instead of just cobblestone. This would require more wood to heat the furnace but it would be worth it.

To acquire stone to construct the walls around this village I decided to cut a shaft right through the side of one of the hills. I dug up a fairly large quantity of rock but I also lost track of time. By the time I left the mine shaft it was already dark out. I was a bit worried about the villagers being attacked by zombies. I quickly slept in the bed that I happened to be carrying with me and it was instantly morning. I was a little late but my villagers made it. I did see the remains of at least one zombie right outside the door of one of my villagers. I need to be careful or the zombies would wipe out my entire village. It isn't really safe until I have a wall constructed and a tone of torches setup all around town. They need to be placed inside every house.

Eventually I made a quick trip back to my first base in the jungle to grab all of the resources I left there and bring the to the new village I had been working to fortify. I also brought some jungle logs and cocoa beans with me on my way back to the savanna. Was able to start growing a cocoa beans right there in the savanna. I also planted a bunch of watermelon and pumpkins. The wall was also starting to come along nicely at this point and I was starting to get the village cleaned up a bit.

Monsters Under The Village

I've been hearing zombie and monster noises in my village day and night but I don't see anything there. I'm about 99% sure that there is a cave system right beneath the village and that it is loaded with monsters. I'm going to have to tunnel under the village and check it out at some point.